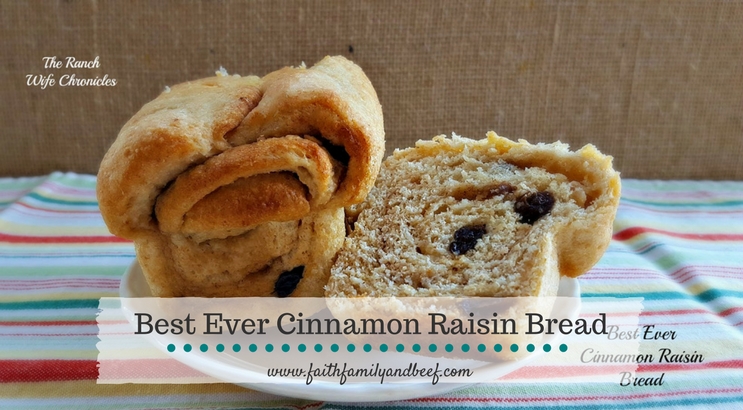 Robyn was one of the first bloggers that I connected with that I had not previously met in person. Somehow (I think through a mutual friend’s blog – Feed Yard Foodie), she found me, reached out as a seasoned blogger, we connected and have been friends ever since.

Although we have never met in real life, we are both native Nebraskans, share a love of photography and the outdoors, and write about our lives as rancHERs on our respective blogs – me here and Robyn at The Ranch Wife Chronicles. Robyn is here today to share her recipe for the Best Ever Cinnamon Raisin Bread.

Last summer, I tried Terryn’s recipe for Best Ever Buns. I like making my own bread and this recipe caught my eye as it is simple. After baking up a batch its name doesn’t disappoint!

One day I was thinking about what to make for breakfast and cinnamon raisin bread crossed my mind. My next thought was “Why couldn’t Terryn’s recipe work to make the cinnamon raisin bread?” I decided to give it a try. My Mom likes to say that a recipe is just a guideline. Most of the time that idea works and I found out Best Ever Buns make for delicious Cinnamon Raisin Bread.

Recipe and Photos courtesy of Robyn – The Ranch Wife Chronicles.

Doesn’t that bread look delish?!?! What about you do you also regard recipes as more like guidelines than actual rules? If so, what are some recipes that you have transformed into something even more scrumptious? I’d love to hear about them, so leave your thoughts in the comments. 😉