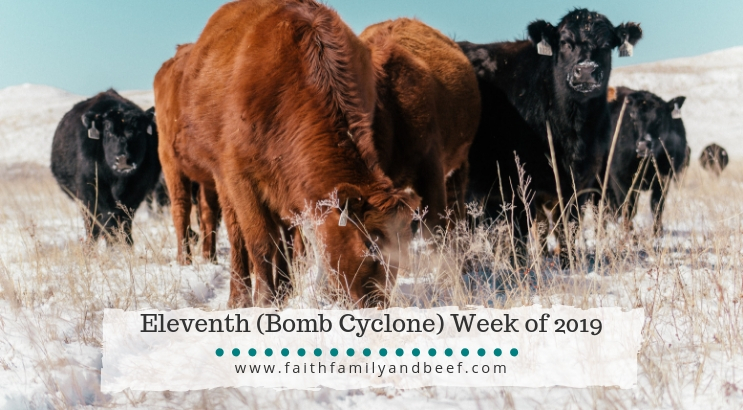 You might be wondering why I’m sharing this photo of an apparent pants wetting incident. And I’m here to tell you that’s not what this is.

I mean, it was a pants wetting incident, but not one caused by my mom bladder and weak pelvic floor.

This pants wetting incident was one of the wakeup call variety – a message (heard loud and clear, by the way) from the Man Upstairs to count my blessings and adjust my attitude.

The day started innocently enough – the sun was shining, the temperatures were warming, and Taggert and I had moved and caked the cows all in time for me make it back to the house in time for a live Instagram chat with 4F Farms.

Things were looking up.

We headed out to move the solar in preparation for tomorrow’s herd move, which is in preparation for the impending blizzard slated to roll in tomorrow night. I was putting the second to last panel on the trailer, which required some finagling to make fit. And after telling Taggert no less than 15 times to be careful to not fall in the water (tank or any of the various puddles) because we didn’t have any extra clothes with us, I fell into the tank.

Well, stepped back into it really.

But I most definitely lost my balance whilst finagling and had accepted the inevitable drenching that was coming my way. So, I opted to step back for a waist-down soaking rather than fall in back first for a full-body saturation.

I could have asked why me, but I knew why. While we were in for lunch and the Insta live, I’d seen something that had really chapped my khakis. And all the while I was picking up the solar, I was fussing and cussing over it in my head (and if I’m being honest, also to some friends on Facebook messenger).

I had a bad attitude that needed adjusted. And adjusted it was.

Sometimes God whispers to us, friends. And sometimes he straight-up yells. Today was one of those days I didn’t have to strain to hear Him or guess what he was trying to say. I knew the minute I lost my balance that I was headed for the drink. And I knew the second I hit the drink why I was there.

He was literally cooling me off and reminding me to cut the attitude and count my blessings. And count them I did, starting with the fact that it was nearly 50 today and not 8 below like it was last Monday.

Cows can withstand really cold temperatures without much assistance from us, especially if they can stay dry and out of the wind. But since we’ve got a winter storm looming and we’re expecting rain to kick it off with snow and wind as the grand finale, we’re moving the heifers into a pasture that has better protection (read – taller hills/deeper valleys) and have put out extra feed (extra feed = extra energy/warmth)
⠀⠀⠀⠀⠀⠀⠀⠀⠀
If you follow along with my stories, then you know that we spent most of yesterday prepping for the snowmagedon that’s on its way. We caked the heifers, moved a solar, I fell in a tank, and strategically put out hay in the pasture where Taggert and I are moving them just as soon as we get home from preschool today.
⠀⠀⠀⠀⠀⠀⠀⠀⠀
We’re (mostly) prepped for the worst. Now it’s time to pray for the best.
•

It’s here. The storm showed up right on time as predicted with all its fury. The driving rain is starting to freeze as the wind howls and will soon turn to snow as the temperatures drop. And as the storm rages outside, there’s a war being waged in our hearts and minds.
⠀⠀⠀⠀⠀⠀⠀⠀⠀
Did we do enough? Should we go put out more hay? Should we put out another load now, wait ‘til later, or try tomorrow? Will we be able to make it to the cows tomorrow?
⠀⠀⠀⠀⠀⠀⠀⠀⠀
Logic tells us that we’ve done all we can. And we know we have. We know we did what we could. But that doesn’t stop the worry. It doesn’t stop the doubt, the second guessing, the what ifs and if onlys. It doesn’t take away the ache in our hearts or the pits in our stomachs.
⠀⠀⠀⠀⠀⠀⠀⠀⠀
So, we pray and take heart in knowing that it’s in God’s hands now.