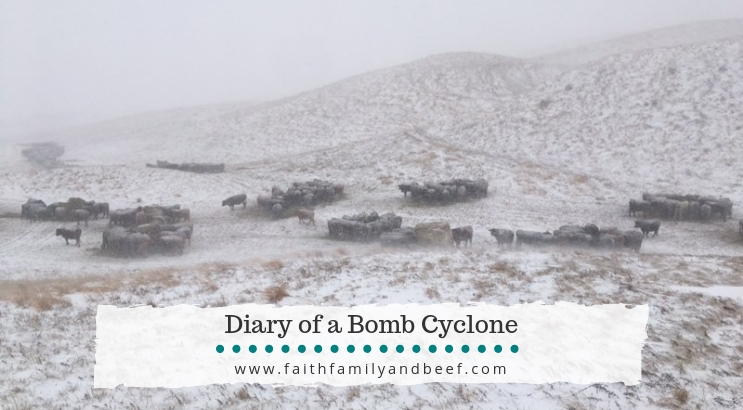 This week has been one for the record books… literally. While we had plenty of warning, I don’t think anyone really knew what to expect from the bomb cyclone, winter storm Ulmer. I mean, I’d never even heard of the term bomb cyclone before.

We may not have known then what to expect, but we do now. This is our account.

It started off like a normal Monday, but we keep a close eye on the forecast and knew there was a storm coming and it was going to be a big one. So, after bus stop drop, Taggert and I went out to move and cake the heifers. It was a scheduled move and cake day, so that wasn’t really out of the ordinary. But moving again on Tuesday was.

The rest of Monday, we spent prepping for Tuesday’s move. Mr. FFB put out a few loads of hay, and Taggert and I grabbed a solar pump so the heifers would have water. In the process of picking up the solar, I fell in the tank. You can read more about that situation HERE.

Again, Tuesday started off like any other day. We did bus stop drop and Tagg went to preschool. But we knew what was coming, so when we got home more storm prep was underway.

We moved the heifers to the new, more protected pasture. Mr. FFB put out more hay. We made one last loop around to make sure we had everything, since we’d moved so fast. We got the horses, dogs, and chickens bedded down. We said a prayer… lots really. And we waited.

We woke up to a thunderstorm and a whole lotta wind and heavy rain. As I was making breakfast Ten said, “I thought we were supposed to have 16 inches of snow, not 16 inches of this stuff.”

Mr. FFB started questioning our prep and second guessing our plan. We settled on him going out mid-afternoon if the conditions allowed to check on things and put out more hay if needed.

The rain turned to freezing rain, and the wind kicked it up a notch. I went out to secure the grill and the trampoline. I read later that the wind speeds set records, gusting in excess of 80 mph.

Mr. FFB got the tractor started, packed supplies in case he got stuck or turned around, and headed out to the cows. I waited with bated breath.

I received the following text and I thanked the good Lord above.

We waited out the rest of the day praying, prepping in case we lost power and thankful we still had it.

We tucked the kids in bed and settled in for the night.

The power went out. We gathered up the older two kids whose bedrooms are in the basement, brought them upstairs, and tucked them in snug as bugs ‘til morning.

I woke, if you can call it that as I didn’t sleep well at all, and Mr. FFB and I immediately started work to get the generator running and a heater plugged in. The wind was still howling, and the snow was still coming down… well, driving down really.

I percolated some coffee on the stove and made some oatmeal for breakfast. Thank God for gas stoves. We watched the storm, waiting for it to break so we could get to the heifers.

I called the power company to report the outage and found out that the after-hours calling center had been evacuated due to flooding. While we were in the thick of the bomb cyclone here in western Nebraska, most of eastern Nebraska was being flooded. Literally the entire state was closed.

The sun started to try and peak through and by 10 we had sun. The wind was still howling, and although it did settle down a little, it was strong the rest of the day.

Mr. FFB headed out to the heifers in the tractor to find them right where he’d left them (insert huge sigh of relief). The hay we’d put out in prep was all but gone, so he put out another load and a couple of alfalfa bales for them.

The rest of the day was spent refueling the generator to keep the house warm, sledding and snow fort building, and praying for our friends and neighbors who are in the thick of calving and our families in eastern Nebraska where the flood waters were rising.

We had just lit the lamps for the evening and the power came back on. We looked each other in disbelief and started cheering once we realized it was really on. Then we immediately called the power company and thanked them.

We settled in for the night with tired but thankful hearts.