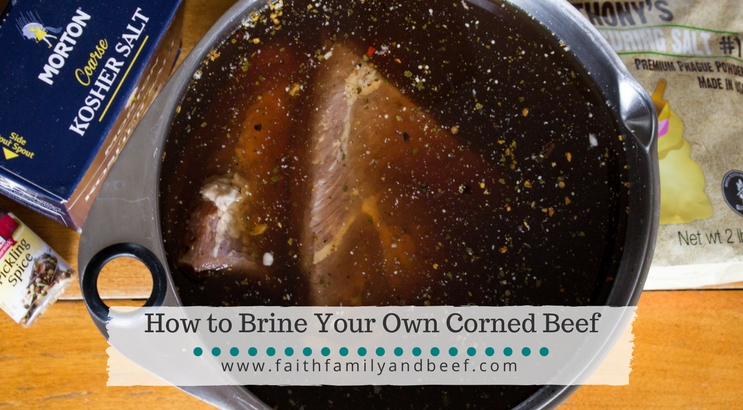 I’m a huge fan of corned beef. I love it with cabbage, in a Reuben, slathered in cream cheese and wrapped around a pickle… Anyway, you get the idea – I love corned beef! As much as I love it, I had not ever made it myself. I had complained about the price of it at the store, but never had the gumption to brine corned beef myself. That is until one fateful reader survey.

In said reader survey, I received more that one response asking, “How can I brine my own corned beef?”

I was embarrassed to admit that I didn’t know because I’d never done it – hadn’t ever even considered brining my own. But my interest was piqued, and I wanted to be able to have the answer (and tutorial) to that question at the ready if and when it came up again. So, without further ado here’s what you need to know to brine corned beef in the comfort of your own kitchen.

The first time I brined my own corned beef, I brined a brisket. That’s what I think of when I think corned beef because that’s what you see in the stores come the end of February through March 17th. But after the whole process was done, I got to thinking that other cuts might work just as good if not better and be more cost effective than the ol’brisket. And it turns out, I wasn’t wrong.

According to Ace VanDeWalle, owner of Ord Locker and old college friend of mine, whom I consulted with for this post…

“Brisket was primarily used because it’s a tough cut and brining is a good way to use it and make it tender. Inside round or top round is also used in a lot of places that slice it for sandwiches, it’s going to be quite a bit leaner.  As for other cuts, a good ol chuck roast would also work.”

I have since turned a top round roast into corned beef. And if I’m being honest (which I always am), I like it better than the corned beef I brined from brisket.

The salts & the spices.

This is the important part because this is what makes the corned beef – corned beef.  All it takes is two salts, one sugar, and a whole lotta spices. Just kidding, at least on the spices. While my version does take a whole lotta spices, they’re all combined into one convenient spice mix – a.k.a. pickling spice.

As far as the salts are concerned, I recommend using Kosher salt and Anthony’s Pink Curing Salt #1 (Prague Powder). While you cannot sub in Pink Himalayan Salt for pink curing salt, you could use un-iodized table salt in place of the Kosher. However, table salt has a finer texture, which means more salt fits into the measuring cup. So, you may want to use a little less, say more like 1 1/4 cups, if you are using table salt.

Anthony’s not only cures meat, but also cracks me up with their labeling humor!

The reason you cannot swap out the pink curing salt for the Pink Himalayan Salt is because pink curing salt is a mixture of sodium chloride (a.k.a. table salt) and sodium nitrite. It’s dyed pink so that it won’t be confused with table salt, as it is meant for curing meats and keeping the botulinum toxin at bay and not for use on the table or in excess.

Some recipes will vary on time in the brine, but if you’ve been around here for very long, then you know that I don’t like to wait… especially when it comes to food. So, my adaptation of brine-your-own corned beef only takes 5 to 7 days.

Featured here is some 6-days-in-the-brine brisket with some strategically placed ingredients. #notanad

When I talked to Ace about the different cuts that one could use for corned beef, I also asked about brine time for said different cuts. Because if it was going to take longer to brine the round or chuck, I maybe wouldn’t have tried it. But the good news it that it doesn’t take longer.

“Basically it’s the same length of time, unless its a really thick cut. Then it may take a few more days.”

After the (almost) week long brining period, your roast has been transformed into a beautiful corned beef. But don’t get too excited. You can’t eat it yet. That is not until you’ve cooked it… for 3-4 hours. I prefer the stove-top method, submerging the corned beef in water with some additional pickling spice and simmering until fork tender. But you could also use one or the other of these alternate low-and-slow cooking methods – roasting it in the oven or cooking it in your trusty CrockPot.

A recipe that let’s you have corned beef all year round, even when you can’t find it in grocery stores.

Trim any excess fat from the outside of the roast and set it aside.

In a food processor or mortar and pestle, coarsely grind 3 tablespoons of the pickling spice. Add the ground spice to a large bowl. To the same bowl add the kosher salt, brown sugar, curing salt, and 8 cups of water. Whisk the ingredients together until the salt is dissolved.

Place the brisket or roast into the water. In the event the roast is not fully submerged, pour in a bit more water. Cover the bowl with a lid and refrigerate for 5-7 days.

After the wait that seems like an eternity, remove the corned beef from the brine and rinse it under cold water. Place the corned beef in a large stockpot, cover with water, and add the remaining tablespoon of un-ground pickling spice. Put the stockpot on the stove and heat over medium-high heat until the water comes to a boil. Reduce the heat and simmer for 3-4 hours or until the corned beef is fork tender.

Take the corned beef out of the cooking liquid, put it on a cutting board, tent and let it rest for at least 10 minutes. At this point, you can put it in a storage container or bag to store in the fridge (for up to a week), freeze it, or slice and serve it. Enjoy!

If you don’t have a big enough bowl (or container) with a lid, a 2 gallon freezer bag or marinating bag will work in a pinch.