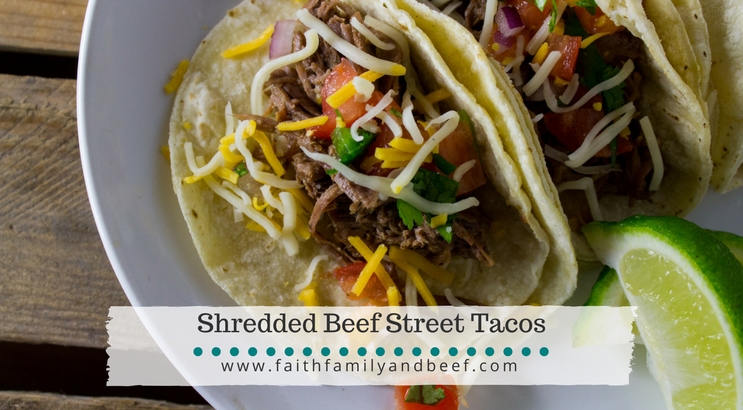 Full disclosure – I had eaten many a street taco, before I actually learned out what made them “street” tacos. Turns out, the defining characteristics that separate street tacos from taco tacos are size and an extra (usually corn) tortilla. Street tacos are much smaller than regular tacos and built with an extra tortilla, making them easier to eat one-handed and on the go.

And if you’re not eating them on the street, but instead in the comfort of your own dining room, their small size also lends itself to fitting more tacos onto one plate. And who doesn’t want more tacos?!

This shredded beef version has been kid (and husband) tested and approved. And it’s super easy to make. I mean, really – you just toss four ingredients into your CrockPot or pressure cooker, set it, and forget it until it’s time to shred. But don’t take my word for it – try them out! Then, let me know how you liked them. 😉

Shredded Beef Street Tacos – a not-authentic-but-still-delicious taco that you can make in your slow cooker or pressure cooker.