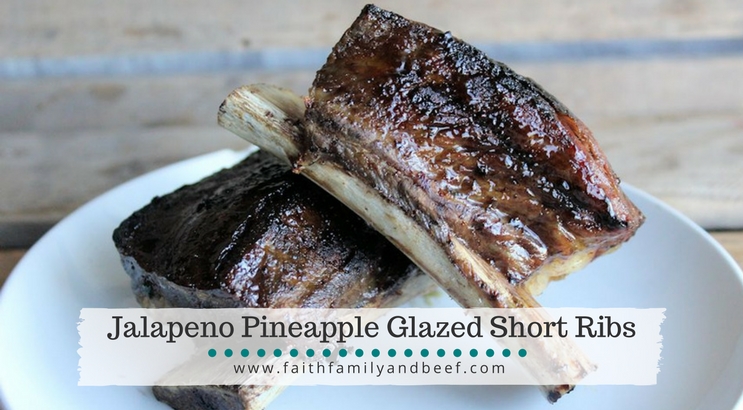 Short ribs – a cut of beef that I used to shy away from cooking. Not because they’re not delicious, because they are. I steered clear of them mostly because they take so dang long to cook. And as we’ve established, I’m a huge fan of recipes that can be done pretty quick.

I only knew of two ways to make good short ribs – braising them for two plus hours or smoke them all. day. long. Delicious as those methods might be, they just aren’t quite quick enough for me. I mean, don’t get me wrong, I’ll devour short ribs that someone else has braised or smoked. I just don’t want to have to cook them that way.

Thankfully, I’ve found a cooking method that yields the kind of deliciousness one would expect from short ribs, and yields it quickly. Seriously, I owe a debt of gratitude to PBS’s Create channel and Cook’s Country for showing me how to make short ribs on short time.

It was on Cook’s Country where I watched how to make Grilled Glazed Baby Back Ribs in less than an hour. The boil first finish on the grill method intrigued me and seemed super easy. So, I tried it. But instead of baby back ribs, I used some of the short ribs I had on hand. And the results – they did not disappoint.

That first time I cooked ribs using this method, I went simple, coating them in Cookies Original BBQ sauce (it’s my favie). Since then, I’ve given them that glazed over look with a few different flavor combinations, such as the jalapeno pineapple combo featured here. Which, I won’t lie, doesn’t look super appetizing when you first make it.

The first time I made it was actually for wing night. And I honestly wondered what I was getting myself into. Because let’s face it – the brown soy sauce, yellow pineapple juice, and green jalapeno jelly just don’t make for a great color combo. But I went through with it. And I promise, the flavor is fantastic! Even my skeptical-of-anything-new-that-I-cook husband and my kids loved it. I mean, LOVED it!

And because we were all in love with the glaze, I decided to slather that sweet, savory, smokey goodness on some short ribs. And let me tell you – it’s way better on beef ribs than it is on chicken wings. Just sayin’.

But you don’t have to take my word for it – try these Jalapeno Pineapple Glazed Short Ribs (on short time) for yourself. And let me know what you think!

Cooking times and temps are based on a gas grill and may vary depending on grill.

You may have a few ribs that decided to fall of the bone. That’s okay. Glaze them and grill them just the same as the ones that stayed with the bone.