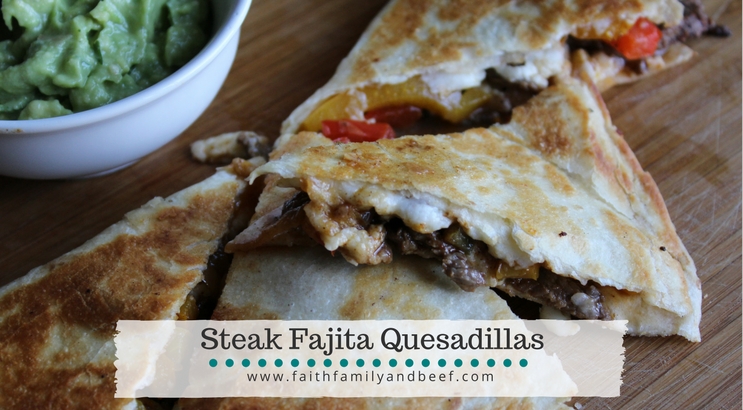 If you are looking for a recipe that is not only contains all of the food groups, but is also like a little fiesta in your mouth – look no further. These Steak Fajita Quesadillas are just what the doctor ordered, at least they were for me back in early 2015.

I developed this recipe whilst baking my youngest babe. I had just been in for my dreaded glucose screening, which tests for gestational diabetes. Luckily, I passed that test. However, they found that my iron levels were running a bit low. Which was concerning, but only slightly because it meant that I got to eat way more beef.

In just three ounces, beef provides 12 percent of the daily recommended value for iron. And let’s be real – when I eat beef, it’s more than three ounces. It’s just so dang delicious! Anyway…

While baking my third babe, I craved Dr. Pepper (still do, actually), spicy food, and citrus. And then the whole low-on-iron issue arose. So it seemed only natural to chow down on some Steak Fajita Quesadillas (served with a side of DP) to satisfy all the cravings and get more iron in me.

Now that I’m not pregnant, I still crave them because they are that delish! But don’t take my word for it – try them out!

So good it’s like a fiesta in your mouth!