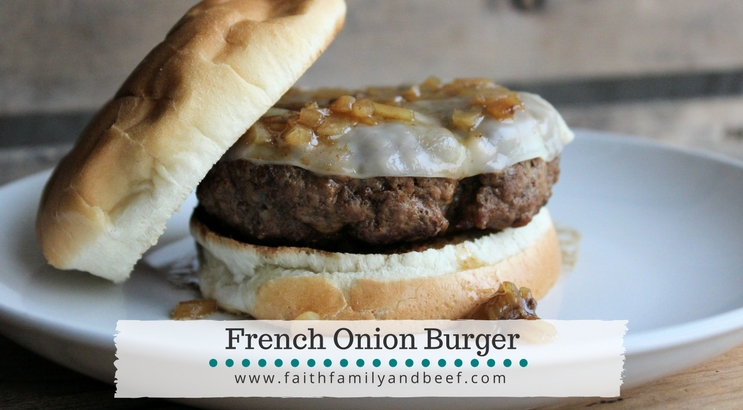 I was first introduced to French Onion Burgers when I asked Sheila (my bestie/old college roommate/cousin) to do some guest posting here on FFB. Growing up she lived in the city and would come visit us on the feed yard over spring breaks and during the summer over county fair week. Anyway, she wrote a bit about when a city girl goes to the country and shared the recipe for French Onion Burgers back when FFB was but a young blog. Both posts have been updated from their original versions.

Sheila’s husband Bo is the cook in their family. They generally make a meal plan together and then “Chef Bo Ardee” executes the plan, cooking their dinner most evenings. French Onion Burgers, a recipe which Bo adapted from the Campbells Kitchen, are a family favorite in their home.

We’ve adapted Bo’s version just a touch because we seldom have canned french onion soup on hand, but we almost have it in the dry packet. And, we like cheese. So, we add a cheese slice to the top of each burger. We generally use whatever cheese we have, but have found that Provolone is the tastiest on these burgers.

If French Onion isn’t your flavor, click here for the for the complete list of FFB burger creations!