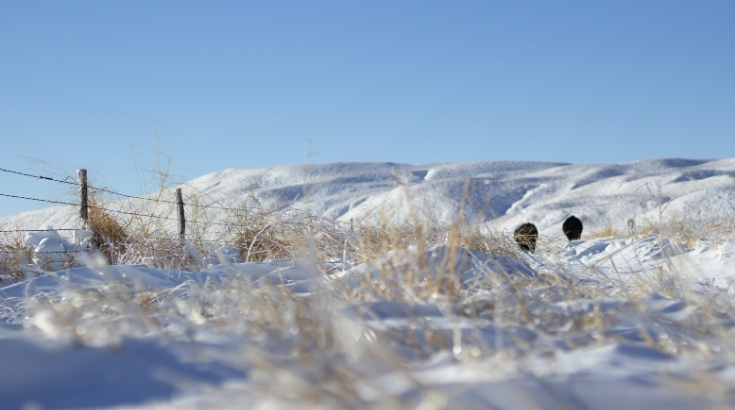 “Today is Thanksgiving and we’re not with family bellied up to the table like these cows at the cake line. The weather foiled our plans for travel this week, and while I can’t say I’m happy about it, I am thankful.

I’m thankful for our family who loves us unconditionally and encouraged us to make the best decision for us, even if that meant missing out on Thanks-mas, being together, family photos, and Grandma’s (uh-mazing) turkey and cranberry salad this year.

I’m thankful for my husband who let me work through all the emotions I had/have about missing out.

I’m grateful for our kids who were so dang excited to see their grandparents, aunts, and uncles and hang out with their cousins, and yet, took the news that we’d be staying home WAY better than their mother – the “adult”.

That was on Thursday – Thanksgiving Day 2019.

That day I was grateful, but also maybe still feeling a little sorry for myself that we weren’t with our extended family. It was the day the freezing fog settled in, which gave way to freezing rain and a thick coating of ice over everything by Friday night.

As I walked to the barn to do chores Friday evening, I thought to myself “I should really get some water ready, there’s no way we’ll have power tomorrow if the wind blows like they’re predicting.”

If it was the thought that counted, we’d have been golden. But alas, in situations like this, thoughts aren’t worth much without action. When I got back to the house, I promptly forgot about getting water ready, decided I’d do the dishes another time, and cozied in for the night.

It was 4:45 on Saturday morning. The lights flickered – once, twice, three times and they were out.

As soon as it was light enough to see outside, Mr. FFB and I ran out to the windmill and grabbed a couple milk jugs and one of his home-brew buckets full of water. We also grabbed the two little generators we have – one to run the space heater in the basement and the other to run the space heater upstairs. And we settled in for the storm that was bearing down upon us.

Thankfully, we have a gas stove and a percolator. So, I was able to stay properly caffeinated through the storm. The kids were able to drink hot chocolate to their hearts content. And we able to enjoy (leftover) turkey noodle soup by lamp light for supper Saturday night.

The power did come back for a brief minute Saturday afternoon, but it was out almost as soon as it came back. That night, we camped the kids in the upstairs living room with lots of blankets in case the generator ran out of fuel before I got up to refuel it. I set the alarm on my phone (which I’d been charging in my car) for midnight and settled in for the night.

At midnight, the generator had run out of fuel for how long, I don’t know. But the temperature in the house was still sixty-two degrees, so it couldn’t have been too long. I refueled, started the genny back up, and made sure the kids were snug as bugs before I headed back to bed.

By morning, both generators were out of fuel, the wind had shifted, and the temperature in the house had dropped to fifty-five. Mr. FFB refueled both generators and started the coffee and before too long we were back up to a balmy sixty-three.

Not long after we got up, he headed out to check on the livestock and put out some feed. I kept the home generators running and made some pan-waffles (or would they be waffle cakes) – waffle batter cooked in a cast iron skillet. And since I hadn’t done dishes Friday night, and we had quite the collection of dirty dishes going on, I heated some water on the stove and proceeded to wash what I could before the water needed changing.

Then the kids and I ran back down to the windmill to replenish out water supply so we could do more dishes. And wouldn’t you know it, about the time I had the second round of water heated and was ready to wash, the power came back on.

In total, we had snow and/or freezing fog or rain for four solid days. The kids were out of school for seven consecutive days, every single one of which they spent some hours of the day sledding. We were without power for thirty-two hours. Some of our friends were out of power for longer. And some are still without as I write this.

The storms that passed through were brutal and unrelenting. They left a path of destruction in their wake that saw nearly 200 power poles down and hundreds of people left without power. But as the storms passed and the sun came out, the beauty began to reveal itself in the snow-covered hills, in the ice-covered everything, and in the resilience of people.

I often reflect on experiences to try to glean the lesson, God’s laid out for me. And I really feel like this one was to drive home the point that where there’s devastation, there’s still joy. Where there’s destruction, there’s also beauty. And where some see a storm, others see opportunity.