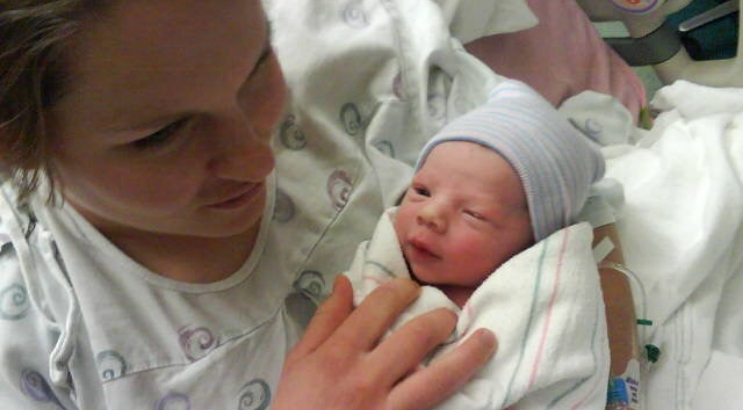 Since I’ve been on a birth story kick, because it’s his birth week, and because who doesn’t love a good birth story, I’m sharing the story of the one that started it all – our son Tripp.

It was 4 a.m. and there I laid having contractions, which was really nothing new. I’d been having noticeable contractions since I was 28 weeks pregnant. What was new was the consistency of the contractions, coming every ten minutes like clockwork as I lay there until my alarm went off and it was time to get up for work.

I told Mr. FFB about the consistency of the contractions but decided that since I had a doctor’s appointment that afternoon, we’d just wait until then to see what was up. After almost 10 weeks of contractions, we were pretty sure these would fade as the day went on. So, we parted ways and went to our respective jobs.

Since the day he found out I was pregnant, my boss at the feed yard had me off my horse and in from outdoors pushing paper in the office. And that’s exactly where I was when she walked in, the feed yard secretary that is.

I was standing at the filing cabinet filing paperwork when she got to work, took one look at me, and asked, “What’s going on? You don’t look right.”

“Well, I’ve been having contractions 10 minutes apart since around 4 this morning.”

“Umm… What are you doing here? You’re in labor. And you need to go home or to the hospital right now. And be sure to pack some Chapstick for the hospital.”

“Umm, okay,” I chuckled because I wasn’t yet convinced this was the real deal.

But I did as she asked and headed home where I napped, ate some lunch (a philly cheese steak sandwich that was dang delicious!), and threw some Chapstick in the hospital bag before heading out to my afternoon OB appointment. I took my time savoring my sandwich, heading out the door with just enough time to make it to my appointment only to find that my car had a flat tire… not a low tire. A flat tire.

No worries. We had the pickup I could take. So, I opened the shop door to get it out only to realize the horse trailer was hooked up to it. Running late, 37 weeks pregnant, and still contracting at a regular clip, I proceeded to hastily unhook the horse trailer. I got it all unhooked and made it to my appointment only a couple minutes late.

The appointment started out like all the others – weight, vitals, etc. But when we got to the part where my doc asked how I was doing and I told him about the contractions, he immediately sent me to another room to be hooked up and monitored to see if this was the real deal or more of the same Braxton Hicks we’d been dealing with for going on 10 weeks.

After about an hour, he said I was definitely having regular contractions, but wasn’t sure I was quite ready to go downstairs to labor and delivery just yet as I was only dilated to 3, which I’d been for a couple of weeks. He told me to go walk around the mall or the parking lot and to come back in about an hour to see if I’d made any progress.

It was a gorgeous day, so I walked around the hospital parking lot. I walked, and I talked. I called my parents and Mr. FFB’s parents to give them the heads up that it might be go-time. I called Mr. FFB to get him headed that way. He was still at work and his work was a solid hour away. And I walked a little more, until the hour had passed. Then I went back upstairs to see what progress I had made.

I’d gained a full two centimeters of dilation in that hour and we were headed to labor and delivery. We got settled in and set up with an IV, some antibiotics (because of my positive Group B strep test), and one of those super handy hospital mugs with the bendy straw. Mr. FFB arrived shortly after I got there. We walked some more. At around 7 ish that evening, my doctor came in and broke my water. And we walked some more.

At some point while we were walking, I made a comment about how “these contractions are going to have to get a lot worse for this to be as bad as everybody says it is.” Famous last words, friend. Famous last words.

We went back to our room to chill and (apparently) to watch some survival show where Bear Grills ate a baby bird. True story. That’s what Mr. FFB was watching, and I’m pretty sure that’s why Tripp has always been into eating weird things (sand burrs, ants, etc.) and honing his survival skills.

That’s when it got a lot worse. But it wasn’t the “period cramps on steroids” or “back labor” that I’d heard and read so much about. Nope. It was pain in my legs. My quads hurt so dang bad I couldn’t put my legs straight. I’m a big mental preparedness kind of gal and since no one I knew told me about this kind of pain, I was not prepared. Not even a little bit. The only way I was remotely comfortable was to have the back of my bed up and my knees bent.

I’d sworn not to get an epidural, not because I’m against them, but because I watched too much A Baby Story on TLC growing up and the thought of a needle that long going into my back scared the bejeezus right outta me. But I was not opposed to other pain meds and I was getting frantic, so I asked my nurse for some pain meds. I had two doses before I realized those meds were only good for a buzzed feeling that only lasted a contraction. Thankfully, I was fully dilated and ready to push not long after that realization.

At some point during my labor, my nurses had brought in some student nurses. She asked if we minded if they were there for the delivery. I was not a fan of this idea as I had it in my head that it would be just Mr. FFB and I in the room when our son, our first baby was born. But, Mr. FFB said “sure, they can be in here” and later told me “they’ve gotta learn some time.” At the time, I wasn’t super impressed with his decision, but I’ll be the first to admit I was wrong. I was dang glad to have them in the room for delivery. They each took a leg and helped keep me comfortable, so Mr. FFB could hold my hand and give me the kick-in-the-pants pep talk I needed when things got serious and I was convinced that I couldn’t.

It was around 10 p.m. when I got the go ahead to push. My nurses were there for most of the pushing. And it was my nurse Megan who told me to “push like I was pooping,” which aside from the Chapstick was the best advice I’d been given during my labor. Once I changed my pushing technique and started “pushing like I was pooping,” things moved right along.

PS – if you’re an expectant mother reading this, I fully stand behind the Chapstick (it’s a lifesaver) and push like you’re pooping (also, a lifesaver) advice.

Since I’ve been on a birth story kick, because it’s his birth week, and because who doesn’t love a good birth story, I’m sharing the story of the one that started it all – our son Tripp.