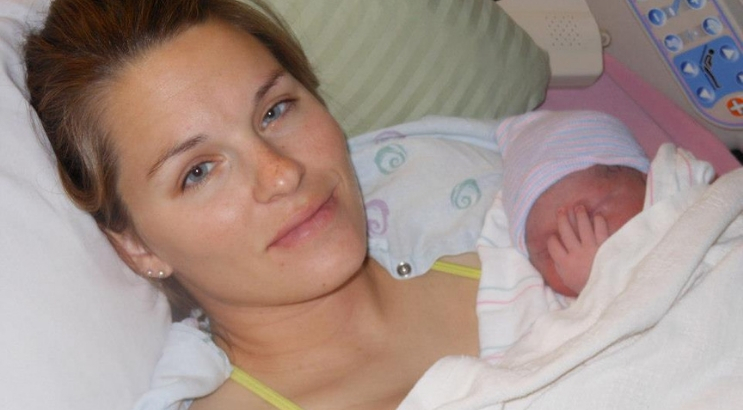 Four score and seven years ago…

Okay, it hasn’t been four score and seven. I mean, some days it feels like 87 years, but it’s just been seven years since our middle daughter made her appearance. And I thought what better time than now to share her birth story with the world because who doesn’t love a good birth story?!

The year was 2012 and it was a sweltering September Saturday in Nebraska. It was also opening day of Husker football season and like all good Nebraskans, Mr. FFB and I were taking in the game on TV. My parents, who were slated to come sit with Tripp while we had Tenley, were at the game. The minute the game was over, I called my folks and told them to hurry up and head on out because I was in labor.

I was totally joking.

But I couldn’t resist the prank because I am my father’s daughter, and we’re jokesters like that. After I had them going for a bit, I clued them in that I was joking. We discussed the Husker victory, then I let them go. Mr. FFB and I got Tripp settled down for the night and took in more college football.

At around 8:45 in the p.m., I started having contractions and they were coming five minutes apart. Because I was only 36 weeks and 5 days, I guzzled a bunch of water and laid on the couch to see if maybe they’d settle down and go away. They did not.

I called the labor and delivery department at our hospital to see what they had to say, but more to let them know we were coming. The midwife from my OB office happened to be the one answering calls that night. I gave her the rundown of what had been going on and what I’d done and told her we’d be heading in as soon as we had a sitter for our son. She told me, “Oh you’re only 36 weeks. That’s a little early for labor. Those are probably Braxton Hicks that will go away soon if you just drink some more water and lay on the couch.”

To which I replied, “Well, I did have my son at 37 weeks, and this feels like real labor. So, we’ll probably just go ahead and come in.”

She told me again she didn’t think I was really in labor and that I’d just have to prove her wrong. Challenge accepted.

I called my parents for the second time that night to tell them I was in labor. This time it was the real deal, not a joke or a drill. It was in fact, go-time. I told them we were headed into the hospital and that we’d called some friends to come stay with Tripp until they could get there.

Our friends showed up at around 11:45, and we headed to the hospital. I drove, and on the way we discussed her middle name. We’d always planned on all of our kids having the same initials as we do – T.R.D. But we just couldn’t settle on an R middle name for Ten. So, we decided to go with a K middle name instead. And neither one of us are sad about that decision.

When we got to the hospital, the nurses also weren’t convinced that I was really in labor either. So, we walked the halls of the hospital for an hour to see if I’d progress. And wouldn’t you know it, I did.

I gained two centimeters of dilation in that hour with no signs of slowing down. By the time the doctor got there, I’d gained two more centimeters. At that point (3 in the a.m.), I was dilated to seven centimeters and she made the call to break my water, which if I’m being honest totally feels like you’re peeing your pants.

After the whole water breaking situation, we were left alone to rest. At six, I called my nurse because it felt like my contractions had slowed way down and I thought I needed some Pitocin to get this party hopping again. I don’t know of anyone in their right mind who actually asks for Pitocin, if you’ve had it then you know why no one asks. But there wasn’t really any turning back… I mean, we were at the point of no return. I couldn’t go home with my water broken and seven centimeters dilated.

My nurse agreed and called the doc back in. At seven, I started the Pitocin. Progress was still slow, but the contractions were much more intense. And by 8:30 I was ready to push. My cervix, on the other hand, was not.

Despite giving myself progesterone injections once a week from 18-34 weeks, my cervix has been dangerously short and soft throughout the last ten weeks of my pregnancy. So, I was thoroughly confused and a little mad (okay a lot mad) that the dang thing wouldn’t just soften up already so I could push.

I wanted to push. I needed to push. And I wasn’t going to be able to control it.

My nurse suggested a dose of narcotics to take the edge off. But because I’m stubborn and wanted to have this baby without an epidural or any drugs whatsoever, I refused.

I refused, but I was frantic. I kept saying “I can’t” because I really didn’t think I could control my body and not push. And that’s when Mr. FFB stepped in.

He grabbed my hand, looked me square in the eyes, and told me, “You can!” It wasn’t the first time he’d given me this kind of firm affirmation bordering on a kick-in-the-pants. He’d done it two years prior when we had our son too. And it was exactly what I needed in that moment.

“You can, but let me get suited up first.”

“No guarantees,” I said as I proceeded to push.

I got the sense that the doctor wasn’t super impressed with my pushing, but all’s well that end’s well, right? And it ended well.

Six minutes and three good pushes later our sweet, sassy Tenley made her debut, weighing in at 6 pounds 13 ounces and standing 18 ½ inches tall.

As for the midwife that wasn’t convinced I was really in labor, she signed my discharge papers a couple of days later when we were headed home. She said with a chuckle, “Well, I guess you proved me wrong.”