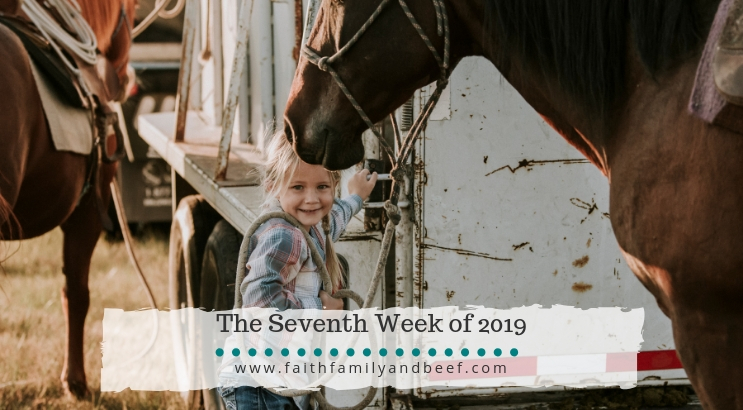 In case you were wondering how my Monday’s going, I totes forgot to comb and fix this girl’s hair this morning. So, while we were waiting for the neighbor kids to hop in for bus stop carpool, I took my own ponytail out of my hair and used the holder to toss her’s up in one of those top-of-the-head messy ponies.

Now she’s super stylish and I’m basically a front-runner for that coveted Mom of the Year Award. It was win-win, really.

Five years ago yesterday, with the support of family and friends, I did something I’d been dreaming of doing for a solid five years. I hit publish on I Never Work, which was the very first blog post I ever published on FFB, or elsewhere for that matter.
⠀⠀⠀⠀⠀⠀⠀⠀⠀
Yesterday, FFB turned five.
⠀⠀⠀⠀⠀⠀⠀⠀⠀
It’s hard for me to believe that I’ve been at this for half a decade, but it’s true. On February 11, 2014 FFB was born and it’s been such a crazy, beautiful ride.
⠀⠀⠀⠀⠀⠀⠀⠀⠀
There’ve been ups and there’ve been downs on this journey. I’ve done some things right and done others way wrong. There’s been small wins, big wins, and a fair amount of stumbling along the way. And I’ve learned so much about myself as a writer and a human.
⠀⠀⠀⠀⠀⠀⠀⠀⠀
Over the last five years, this space has grown into so much more than I would have ever imagined. And I have you to thank for it.
⠀⠀⠀⠀⠀⠀⠀⠀⠀
Whether you’re brand new or you’ve been here since I Never Work, thank you. FFB would not be what it is today without you. And that’s not even a joke, it’s just a fact.
⠀⠀⠀⠀⠀⠀⠀⠀⠀
So, thank you again – thank you for being here and supporting FFB!
⠀⠀⠀⠀⠀⠀⠀⠀⠀
Click HERE for a slightly more in depth look at the past five years.

I had a headache yesterday afternoon. And it was a doozy.

And by doozy, I mean it was probably a migraine. It’s just that I’m always hesitant to label my headaches as such even though that’s what they likely are because when I think migraine I think completely debilitating, can’t-function-at-all level headache. And I can function, just not well. But that’s not really the point of this story – it’s a tangent.
⠀⠀⠀⠀⠀⠀⠀⠀⠀
Getting back to the point…
⠀⠀⠀⠀⠀⠀⠀⠀⠀
I still had this headache when the kids got home from school. Mr. FFB was at a meeting for the evening. We had Ten’s Valentines box to finish, which required paint, hot glue, and glitter. And I had to feed the kids and get them to bed before I could do what I really wanted/needed to do, which was sleep it off.
⠀⠀⠀⠀⠀⠀⠀⠀⠀
But, much to my surprise, (aside from a little assistance with the paint and hot glue) the kids took care of themselves and each other. All the things I normally do in the evening for them, they did for themselves.
⠀⠀⠀⠀⠀⠀⠀⠀⠀
I don’t say this to brag on my kids because believe me I was as shocked myself. I say this because they can do it. All (okay, maybe not all but I think you know what I mean) the things we moms/parents think we have to do for our kids – they can do for themselves.
⠀⠀⠀⠀⠀⠀⠀⠀⠀
Now, I’m not saying we should let them do all the things all the time. But what I am saying is that we should stop feeling guilty when we can’t because they can.