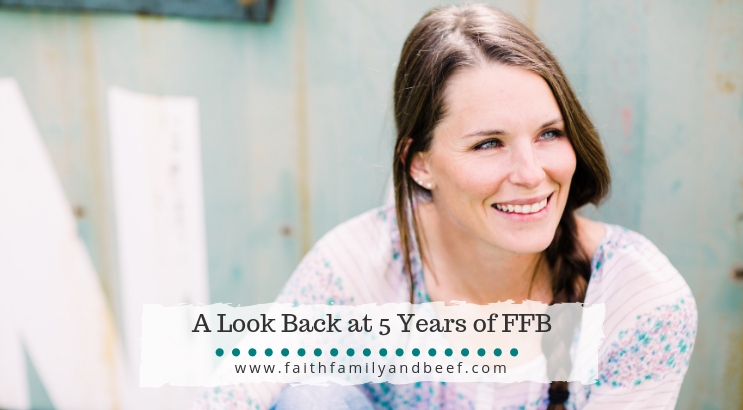 Five years ago, with the support of family and friends, I did something I’d been dreaming of for five years. I hit publish on I Never Work, which was the very first blog post I ever published on FFB, or elsewhere for that matter.

It’s hard for me to believe that I’ve been at this for half a decade, but it’s true. On February 11, 2014 FFB was born and it’s been such a crazy, beautiful ride.

There’ve been ups and there’ve been downs on this journey. I’ve done some things right and done others way wrong. There’s been small wins, big wins, and a fair amount of stumbling along the way. And I’ve learned so much about myself as a writer and a human.

Over the last five years…

I’ve shared our everyday ranch life, how to posts, posts about cattle care, random stories, and recipes – countless recipes. One of those being Juicy Sirloin Tip Roast, which is not only the most popular recipe here on FFB, but also the most viewed post of any kind.

I’ve started conversations around important (and hotly debated) things like whether folks prefer cinnamon rolls with their chili or not. I’ve met so many amazing fellow writers. And, I’ve made genuine connections and built lasting relationships with folks I may never meet in person.

I’ve had the opportunity to travel from Texas to Wyoming and to both coasts to talk about beef with everyone from fellow ranchers and dietitians to directors from McDonald’s.

I’ve written on tough topics, like the environment and sustainability, that time Mr. FFB and I were in roommate mode, and toughest of all – my chin hair. And thankfully, those posts have not only resonated with folks, but also become fan favorites.

And I have you to thank for it.

Whether you’re brand new or you’ve been here since I Never Work, thank you. FFB would not be what it is today without you. And that’s not even a joke, it’s just a fact.

So, thank you again – thank you for being here and supporting FFB!