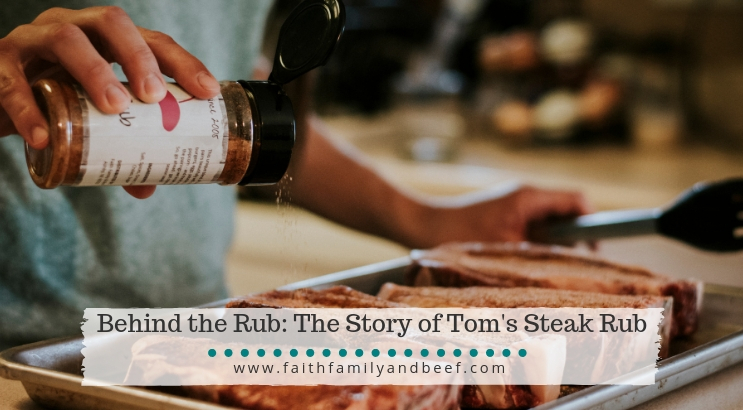 Tom’s Steak Rub is but one of the awesome (if I do say so myself) products available in Shop FFB. Lovingly referred to as “The Rub,” it’s packed with flavors as unique as the story behind The Rub.

The story begins back in 2005 in a farmhouse kitchen where Tom, searching for the perfect steak rub, stumbled on a recipe that was good, but not quite perfect. He substituted, tweaked, added, and adjusted until he had a blend he was pleased with.

He rubbed some steaks, grilled them up, and taste tested his creation with the two roommates (one of them was me and the other was My Sheila) with whom he rented the farmhouse. All three agreed – it was basically perfection on a plate. And the rub went on to become a steak grilling staple in the farmhouse kitchen for the duration that the trio lived together.

Tom’s Steak Rub has remained a constant in our kitchen over the course of 13 years, a wedding, 5 moves, 3 kids, and a few job changes. It always received rave reviews from family and friends who partook in its deliciousness. And in the winter of 2014, the we made the decision to make it in bulk and passed it out to co-workers as Christmas gifts. It was so well-received that we made the rub an annual gift.

It wasn’t long before requests for refills started rolling in part-way through the year. Co-workers were using it on everything from eggs to pork and loving it because, as it would turn out – the rub is good on pretty much everything. And our co-workers couldn’t get enough.

The rapid rate of refill requests triggered a light bulb in my brain – an ah-ha moment, if you will. I had started my website the very same year we started gifting the rub. And I thought to myself, why not start selling Tom’s Steak Rub? It was already in demand among family, friends, and co-workers, so I went for it.

I became a licensed food vendor, and went to work making, marketing, and selling Tom’s Steak Rub on a grander scale. And just as I thought, it was well received, winning over the taste buds of all those who tried it. It was so well-received, in fact, that I couldn’t keep up with demand.

One short year later, I began exploring the options of working with a private label spice company to help make Tom’s Steak Rub. And in July of 2018, we received our first (of hopefully many) shipment of hundreds of bottles of Tom’s Steak Rub.

The bottle says, we hope your family enjoys it as much as we have – and we truly mean that!

Also, be on the lookout for the upcoming e-cookbook featuring several delicious recipes made using Tom’s Steak Rub. It will be free with purchase to all new customers!

PS – if you’re a past customer/Tom’s Steak Rub fanatic, you’ll be getting a free copy delivered direct to your inbox. So, don’t worry. 😉