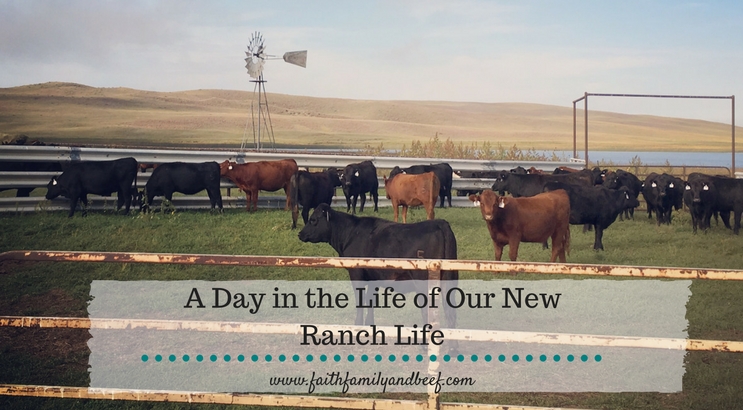 I have been planning this post for a while now. I waited patiently for a typical day to present itself, so I could write about our new routine on the new spread. We started several days fully intending for them to be – well, typical. But, they were not. And now after a solid two weeks of this rigmarole, I am fully, 100 percent convinced that there is no such thing as “typical”. In fact, I am more convinced of the existence of the Loch Ness Monster than I am that “typical” days actually exist. As a result, I am just going to write about today…

A Day in the Life of Our New Ranch Life

4:30 a.m. Woke up and promptly made the coffee because – first I drink the coffee, then I do the things. And I had a lot of things to do today. It was preg day for the yearling heifers – our first preg day since Tom’s promotion and our moving.

All that aside, preg day is when we bring the females in to be checked for pregnancy. The pregnant ones punch their ticket into the reproductive herd, while the open, or not pregnant, individuals go on to the feed yard where they will fulfill their purpose, providing nutritious beef.

5:00 a.m. I began grating the zucchini my mom left here a couple of weeks ago. The plan was to use it to make a loaf or two of zucchini bread to supplement my go-to breakfast casserole when I took break out for the preg crew. Using a double batch of the recipe for Classic Zucchini Bread, recommended by my friend Brandi of Buzzard’s Beat, I whipped up enough batter for four small loaves an one big loaf. And had them in the oven by 5:30.

5:45 a.m. On account of my forgetting frozen hash browns, I began grating several potatoes and one onion for the hash brown base of the breakfast casserole. Once I got them all grated, I threw them in “big daddy” frying pan and cooked them a bit.

6:15 a.m. Into “big daddy” the sausage went as I continued to prepare the breakfast casserole. Meanwhile, my favorite mother in-law, who just so happened to surprise us by coming to visit one day early, went down to wake Tripp up for school. After a nice zucchini bread breakfast, Tripp proceeded to get ready for the school day ahead.

7:00 a.m. My favorite mother in-law loaded all of the kids up, even though she only needed one of them, and headed up the road to drop Tripp off at the neighbors, where he would catch a ride to the 7:25 a.m. bus stop.

8:00 a.m. I am still getting used to the temperament of my new gas oven, so by this time the breakfast casserole was finally done. We loaded all of the breakfast goodies, including a freshly brewed thermos full of hot black coffee, and headed up to the corrals to deliver the deliciousness.

9:15 a.m. After some good breakfast and even better conversation, we left the crew with full bellies ready to get back to the task at hand -preg checking the heifers. We headed straight out to our pairs where I was going to start the generator to help pump more water for the hot day that was underway. But, bad news – the generator that Tom had assured me was ready and waiting for me to start was, in fact, not ready and waiting for me.

Okay… I take that back. It was ready and waiting just not at the tank where my favorite mother in-law and I both thought it would be.

9:45 a.m. After texting Tom to confirm the whereabouts of the generator, we beat it back to the house. I dropped my favorite mother in-law off to start browning the meat and baking the shells for the taco salads we’d be serving just a couple of hours later. And I headed back out, generator in tow, to enhance the water pumping situation in the pasture.

10:10 a.m. Help had arrived! Our friend/neighbor/co-worker, came to provide an extra set of hands in the meal prep. With all hands on deck the next couple of hours were a hurried frenzy of chopping, dicing, seasoning, and sauteing.

12:00 p.m. The crew made it in, along with their appetites. They filled their salad shells with all of the everything that makes a good taco salad. And after that, the topped off with the delectable desserts prepared by the same friend/neighbor/co-worker who came to help fix lunch.

1:00 – 4:00 p.m. This time period – I’m not going to lie, it was a bit of a blur. We cleaned up the lunch dishes, picked out my outfits for an upcoming trip, and did a little more unpacking and some laundry. I also used my advanced flockmanship (like stockmanship, but for birds… hehe!) skills to return an escaped pullet back to the hen house.

4:00 p.m. My favorite mother in-law went up the road to pick Tripp up. If you’ve been paying attention I have called her “my favorite mother in-law” five times, give or take a time or two. This is because it is true. Yes. I know only have one, but even if I had more, she’d still be my favorite. Her awesomeness surpasses anything I could have ever asked for in a mother in-law. And I know how good it feels when she calls me her favorite daughter in-law even though I am her only one. So, there is that.

5:00 p.m. With the kids occupied and enjoying the company of their grandma, I settled in with a beautiful view to begin writing this here guide to my not-so-typical day.

6:00 p.m. I invited the kids and my favorite mother in-law to take in the nice evening before supper.

Now: Tom is just pulling in from a long day of pregging, one kid is in bed, another is taking a shower, and the other is practicing sight words with Grandma before bed. So-called “typical” days may be as fanciful as unicorns and monsters of the Loch, but life is good. And, I wouldn’t trade these days for anything.