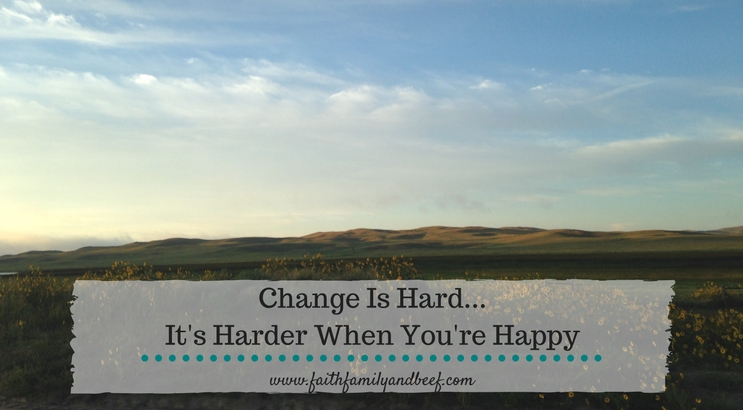 We moved. One week ago, we moved, and I mostly kept it under wraps not because it was a secret. It wasn’t. I was just in denial and preferred not to talk about it. I was in denial, because I was happy – we were happy. And, that may be an understatement.

We were happier than we had been – ever. And, it had been that way since we moved to that little slice of Sandhills heaven three years ago. We loved the house. I loved my yard and the nice stand of raspberries I had going. I had the perfect little garden spot and the best views. We had community and friends who had become family – you know, the ones you call when you need help with your kids and you’re too far away to call grandma and grandpa. They  are our “framily”, and, we were home.

Two months ago, we were presented with an opportunity for Tom, well actually – a promotion. The promotion would allow him to do more of what he loves – teaching and helping others. In addition, he would have more opportunities for learning and honing his skills with the cattle, range, and the ins-and-outs of ranching. We interviewed, and the next day, received an offer.

Accepting the offer would mean really great things for Tom and our family, but it also meant leaving behind the house, the yard, my garden, the gorgeous views (my ever-changing painting), the community, and the framily that we love. The time that we took to make the decision was excruciating to say the least. I cried – like really ugly cried. We consulted with friends and family. We prayed, asking God for a spoiler alert just this one time. And we prayed some more, seeking His guidance in making the very best decision we could for our family. And after an agonizing few days of consideration, the decision was made – we were accepting the offer and slated to move.

Now this is not to say that either one of us were excited about our decision because, well – moving. Moving comes in a very close second on the list of my least favorite things to do, right behind cleaning the hair out of the shower drain (insert triggering of gag reflex and near vomiting situation). We just were not excited about leaving. Our friends, neighbors, and framily were just as unenthusiastic about the move as we were, making the time leading up to our move all the more gut-wrenching.

Seeing the potential and knowing that this was the right move for us professionally, I began focusing on the good. I focused on those little seemingly insignificant positives about the move – the unlimited internet, taking a shower with the peace of mind that you are not going to be scalded without warning and for no apparent reason, the big kitchen, a basement that doesn’t flood every May, and having a million well-placed closets. All of those things, more prayer, and the wise words of a couple of framily members (you know who you are), gave me peace – not excitement, but peace.

Change is hard… it’s harder when you’re happy. But, here we are; one week of packing, three days of moving, seven trailer loads of stuff, one lost (and found) blankie, and several ounces of breastmilk scattered down six miles of road (don’t ask, or do it’s a pretty good story) later, and we have survived. We’re unpacked… mostly. And, we are settling in.

While I don’t love the multitude of sandburs in the yard, or our tiny refrigerator, I am finding more little seemingly insignificant positive things to focus on, and fall in love with, in our new little slice of Sandhills heaven. And with each new day, I am inching closer to something similar to excitement.