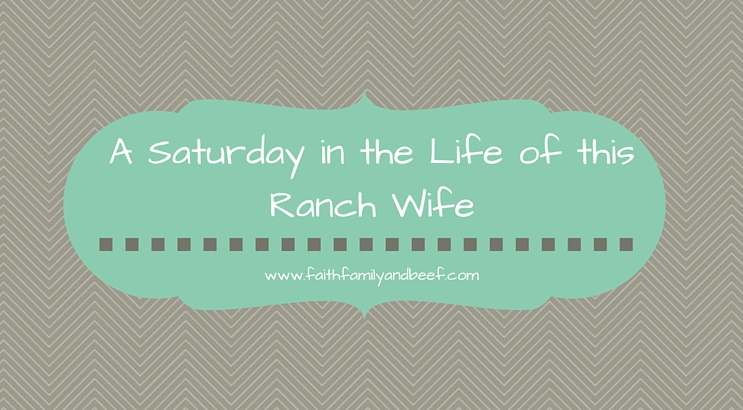 Before I went to bed last night, I had a nice little Saturday planned for today. I was going to deliver cake to the heifers, and then I’d be off to town for a Le Leche League meeting and good coffee. And there was a birthday party for our friends’ twins in the afternoon plans for the kids and I. However, while I still had a pretty nice little Saturday, it did not go according to the plan. The following is how the day really shook out…

7:00 a.m. Poured myself a Poor Woman’s Latte and headed out the door to get the cake loaded and ready for delivery. Up until now we have only been supplementing two out of three of our herds with cake. Today was the first day that the first-calf heifers had cake for breakfast in addition to hay. They are just under a month away from their due date and need the added protein that the cake provides to help them through the home stretch of their first pregnancy.

In order to haul enough cake efficiently with minimal trips back under the cake bins, I had to hook up the cake trailer, giving me two cakers. The fights between the cake trailer and I go way back. One time while I was on my way to feed, it came unhooked from the pickup fully loaded with cake due to a malfunction of the hitch. It now has a brand new fully-functioning hitch that I fight with every. single. time. I hook it up. Today was no exception. The cake trailer and I – pretty much arch nemeses.

After realizing I had the wrong size ball in the pickup’s receiver hitch, and exchanging it for the correct size, I got’er hooked up no problem. Celebrating my victory I pulled under the cake bins only to have cake dust, and a lot of it, rain on my parade – literally. We had a pretty stout south wind today, which resulted in the dust from the cake blowing directly in your face, down your back, and getting pretty much ev.er.y.where!

8:00 a.m. The kids and I caked the small herd of replacement heifers around the house and headed out to the first-calf heifers. I decided to take the shorter route because, well, it’s shorter and I really wanted to make it to the Le Leche League meeting. Tom warned me that the road on the meadow that stood between me and the pasture where I needed to be was pretty wet, but I decided to try it anyway. Let me just say, it was a real blessing that I didn’t end up stuck!

The first-calf heifers moseying in for breakfast.

I made it through, got the heifers fed, and decided to take the long way back home to reload to cake the big herd of replacement heifers to avoid the potential of ending up stuck on the meadow.

9:40 a.m. We made it to the big group of replacement heifers. They were already gathered and waiting for me when I got there as they had seen me drive by on my way to load their breakfast. So, feeding them went quickly and smoothly.

10:15 a.m. Finally headed to town, and only 15 minutes late… for the meeting which started at 10:00. Our Le Leche League meetings usually last a couple of hours, so the optimist in me said I should still attempt getting in on the last little bit of it.

10:55 a.m. I pulled into town just in time for the meeting to be over… But the trip was not a total loss by any means. My friend, and the Le Leche League leader, asked if she could buy me a coffee and meet me at her husbands place of work where she was picking up her kids. Umm… of course. We chatted. I drank the delicious coffee she got me. And then we convoyed to the grocery store where we each picked up a few things and chatted a bit more before parting ways.

1:10 p.m. The kids and I got home just in time to give Tom the groceries he requested and send him on his way to celebrate his friend’s birthday. On the way home, I felt a head ache coming on, so I downed a bunch of water and some Tylenol before making our late lunch of grilled cheeses.

2:30 p.m. I attempted to lay the baby down for a nap foolishly thinking I could take a nap too in an effort to shake this dull nagging ache in my head – the keyword “foolishly”. She was having none of it. So instead, the kids watched some cooking shows on Create TV before popping in a Wild Kratz DVD. Meanwhile, I worked a little bit on writing some of this up and my shop. Have you seen my shop? There are only a few items in it right now, but stay tuned for more and a grand opening!

4:00 p.m. Taggert finally agreed to a nap. And how could I resist a rest when Tenley came to me and said, “Momma, can I ‘sweep’ with ya?” I obliged because these moments, they are fleeting. And one day she will be too cool to cuddle with me, so I gotta take it where I can get it. That and a nap sounded oh so nice.

6:00 p.m. The kids laughed and played with a balloon they got on our trip to town today while I started some dishes and general tidying up.

Now It is shower time for my grubby little munchkins. Then it is off to bed for them and out to feed dogs and continue my general tidying up for me before I settle in to cap my night off with an episode of Castle on DVD.

So our nice little Saturday did not go quite like I had pictured it, but all-in-all it was an alright, slightly lazy, day. How was your Saturday? Did it go according to plan, or was it thrown off right from the get go like mine?