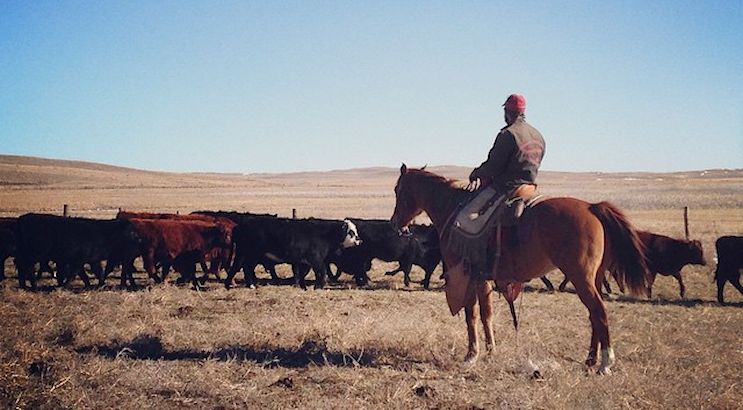 The key to ANY successful relationship is good, clear communication.

A breakdown in communication not only damages confidence, but can also be perceived as dangerous or threatening. Sustained, poor communication often triggers the physiological reaction hardwired in all animals and humans known as fight-or-flight response. In those cases, self-preservation kicks in provoking the individual to either stand and fight, or flee the situation completely.

Reading bovine body language and communicating
that he wanted these calves to walk by him to be counted.

For the safety and well-being of our cattle as well as ourselves, Tom and I have made it a priority to have a solid understanding of bovine body language. By attending stockmanship schools and observation, we have learned how to effectively read and communicate with our cattle, avoiding their fight-or-flight response. For the most part, both Tom and I do a much better job of interpreting what our cattle are telling us than we do interpreting what we are telling each other. This was never truer statement than in the year 2011.

At that time, we were going on four years of marriage, adjusting to being parents, and working full-time jobs that kept us running. The miscommunications between us were so bad that we were constantly triggering the fight-or-flight response in each other, resulting in daily arguments. Eventually, the arguments turned into straight up fights. And before too long, our communication had become so degraded that we both chose to flee rather than fight. While we still lived under the same roof, both of us had checked out emotionally. We internalized everything and communicated nothing. By mid-year, there was no husband and wife about our relationship.

At some point that fall, Tom had gone to visit some friends and while he was there he clued them in on what was going on in our relationship. After hearing his story, they suggested that both of us come to the couples Bible study they were about to begin. Tom ran the idea by me, and at first I was a little reluctant about going. But after some thought, I decided it probably couldn’t make things any worse than they already were and agreed to go. Neither one of us had any idea that accepting their invitation would turn out to be a marriage saving decision.

After completing the dare, we communicate
better than ever but still have room for improvement.

What is SO marriage saving about a simple Bible study? Well, a lot of things, but this was also no ordinary Bible study. This was The Love Dare, a forty day (or in this case several week) dare to love. The dare taught us that we could not change each other; that we could only control ourselves and how we handled different situations. We learned self-control, patience and understanding for one another. Each week saw better communication, less self-preservation, and by the end of the “couples Bible study,” we were no longer just roommates.

We were husband and wife again.

One of the first things you learn in stockmanship school is that, nine times out of ten, the behavior of your cattle is in direct correlation to what you are telling them. If they aren’t behaving the way you would expect, it takes re-evaluation of yourself and your actions to achieve the desired result and avoid triggering their fight-or-flight response. Up until The Love Dare, I had absolutely no idea that the same principle applied to my husband. I could not fathom that his behavior could be the direct result of what I was conveying to him.  But, it was.

Read more about how we learned to communicate and saved our marriage.

I’m not going tell you that Tom and I never trigger fight-or-flight in each other or our cattle. Even with all of our knowledge of bovine body language and all that we have learned about communicating with each other – we still do. But, we are constantly working to expand our communication skills.

Whether it is with your spouse, cattle, kids, or friends – good communication is the key to any successful relationship. It is also an ongoing learning experience. And, there is always, always room for improvement.