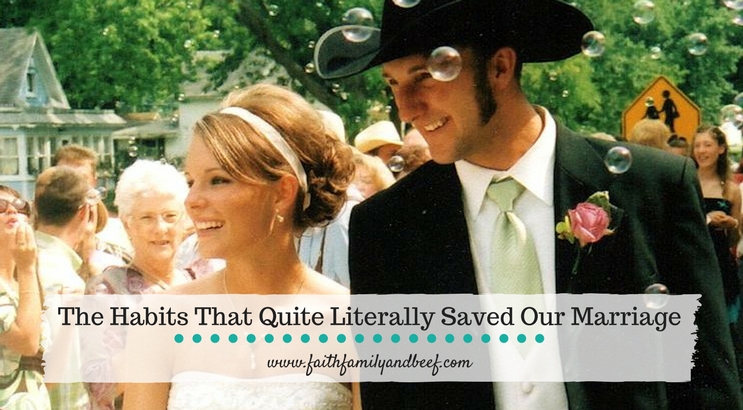 We were going on four years of marriage, adjusting to being parents, and working full-time jobs that kept us running. The miscommunications between us were so bad that we were constantly triggering the fight-or-flight response in each other, resulting in daily arguments.

Eventually, the arguments turned into straight up fights. And before too long, our communication had become so degraded that we both chose to flee rather than fight. While we still lived under the same roof, both of us had checked out emotionally. We internalized everything and communicated nothing. By mid-year, there was no husband and wife about our relationship.

The excerpt above is from what was probably the most personal post I have ever shared – Fight-or-Flight. It told the tale of a time when Tom and I were nothing more than roommates (and not friendly ones) who happened to be raising a son and how we worked through it. I wish I could tell you that all these years later we have everything all figured out and that our marriage is easy-peasy. But – it is not.

The truth is marriage is never “easy.” Marriage takes constant work. It takes two people who are willing to put in the time and effort each and every day ’til death does them part. Although it still isn’t easy, we have figured out a few ways to work smarter, not harder. So, I am sharing our secrets – the habits that quite literally saved our marriage.

Each day we habitually put forth the effort to…

Put God first and each other immediately after.

This principle is one that my dad explained to me as soon as he found out Tom and I were serious about spending our lives together. He told me that when you find the person whom you are going to marry, you put God first because you always put God first (Proverbs 3:5-6), but then immediately after God is your spouse – not your parents (Genesis 2:24), not your siblings, not anyone, but your spouse. Not even your kids come before your spouse.

I heard my dad’s advice, but I did not heed it. I cannot speak for Tom, but I most definitely put him (Tom) first instead of putting Him (God) first. And I did that for quite a long time because in my human understanding I couldn’t fathom how that could hurt us, but it did. And what’s worse is that when our son came along, I moved Tom and God down the bench, putting our son first. It resulted in unhappiness like I had never known.

Embarrassing as it may be to admit, this may well have been the hardest thing for me to make a habit. But once I got this one figured out, the rest of what you are about to read followed suit much more quickly.

No matter what anyone tells you, love is a choice. And Tom and I – we choose to love each other unconditionally as we have been called to do (John 13:34). Don’t get me wrong, we used to play the why-do-you-love-me game, as I imagine most couples have. We even came up with a laundry list of “good reasons” why we loved each other. And do you know what transpired when life happened and those “good reasons” began to drop off the list one-by-one? Roommate mode – roommate mode happened.

We no longer play that game. It isn’t, “I love you because – fill in the blank,” anymore. It is, “I love you – period.” No reasons. No conditions. No matter what. We just love each other – flaws and all.

Grudge holding, score keeping, and being perpetually peeved with each other – for a long time we let these things stifle our relationship as husband and wife. We constantly felt the need to punish each other, which was nothing but hurtful, mostly to ourselves, and completely unproductive. However, the definition of forgiveness never made more sense to me than it did on Day 25 of The Love Dare…

“When you forgive another person, you’re not turning them loose. You’re just turning them over to God, who can be counted on to deal with them His way. You’re saving yourself the trouble of scripting any more arguments or trying to prevail in the situation. It’s not about winning and losing anymore. It’s about freedom. It’s about letting go.”

I am by no means saying that I never do things that upset Tom and vice versa. But now that we both know and understand just how good forgiveness feels, we no longer hold grudges indefinitely, or dig up past transgressions to use as ammunition in new arguments.  Instead, we are quick to forgive – to let go and let God.

“If you’re thinking that your spouse – not you – is the one who needs work in this area, you’re likely suffering from a bad case of ignorance, with a secondary condition of selfishness.” – The Love Dare, Day 5

Because the behavior of others is almost always a direct result of our own actions, our actions need to be the focus. I am always asking myself, “What can I do better?”  Not to mention, we do not have the power to change anything but ourselves and our reactions. Therefore, Tom and I take time for self-reflection. We work on ourselves and pray for each other.