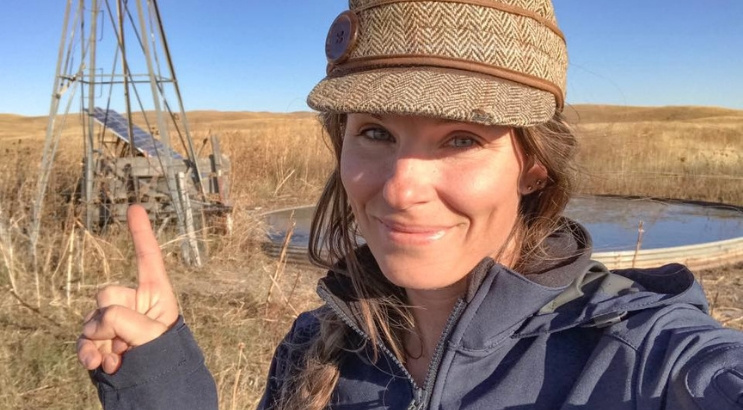 I won’t even lie – last Tuesday was one of those days, due in large part to that solar I’m pointing to.

It started off much like any old Tuesday – devotion, coffee, kids up and ready for school, and bus stop carpool drop off. Once we had the kids off to school, Mr. FFB and I headed out to move calves. It was their first big move post-weaning and it went really well. Some might even say it was a stellar move. Also, some is me.

Mr. FFB had a meeting that afternoon, and I had three solars to get moved. And that’s where things took a turn.

For the first time ever, I tried the tandem move. The tandem move is when you hook two solar trailers to the side-by-side or pickup at the same time. It comes in real handy if you’ve got several solars to move and long distances between where you are picking them up and where you are setting them up.

The tandem move I’ve seen, and helped, Mr. FFB do in the past, but today was my first solo attempt at the tandem move. And I forgot to factor in the fact that I’m terrible at backing up one trailer let alone two.

When all was said and done, I had to hook up and unhook solar trailers no less than seven times to get them set up just right. On top of that, I couldn’t find the panels that go around the solar I’m pointing at. And on top of that, one of the solar panels came apart from that same trailer.

I’d be lying if I said I didn’t cuss a little. I’d also be lying if I said I wasn’t sore the next day from hooking up and unhooking the trailers that many times. But on the bright side, I did get two thirds of my solars moved. I got to use some ranchHer ingenuity to get that solar trailer and its wonky panel secured (it ain’t pretty, but it’s dang sure solid). And my new StormTech coat came that morning.

It was one of those days. Not everything went quite like I thought it would, but I’ll be danged if it wasn’t a good day.

It started off much like any old Tuesday - devotion, coffee, kids up and ready for school, and bus stop carpool drop off.

I didn’t grow up ranching. I grew up on a feed y

The good Lord gifted me with the ability to see ma