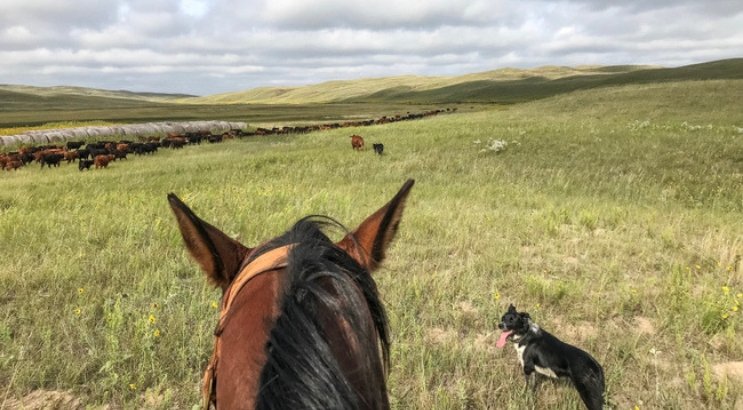 One horse, two dogs, and little ol’ me – we set out on a cool morning last week to gather several hundred pairs (cows + their calves) from a few hundred-acre pasture and move them to a fresh pasture.

When we got to the pasture, I assessed the situation and made my plan to move through the corner gate (the one just past the stackyard in the photo). That’s where most of the herd was hanging out and I was confident those in the hills would be drawn down once we started moving.

Most of the herd followed my plan moving with the greatest of ease right on through the gate in the corner just past the stackyard. As for the remaining one hundred pairs or so… they had different ideas.

They weren’t drawn out of the hills like I thought. And when asked to head that direction, they not-so-politely declined the invitation to head that way. Instead, some thought staying right where they were was a fantastic idea. And those that started moving, thought north rather than west was the way to go.

But did I say, “okay cool cows, you can go your own way”?

I’m not Pete the Cat.

And do you know where that got me? Not to the gate in the corner just down from the stackyard. It got me to a worked up state of sweaty frustration. That’s where it got me.

But once I made the choice to settle down and go with the flow (of cattle), I was able to remember that there was another gate to the fresh pasture in the exact direction the cows were headed. Not my plan, but also not a big deal. We were gunna get the herd where they were going one way or another.

And isn’t that the way of it…

Like moving cattle, life isn’t perfect. And it doesn’t always go the way you plan.

But in those less-than-perfect, not-your-idea situations, you’ve got two choices. You can work yourself into a sweat, cuss, and have a grouch on because things aren’t going your way, like I did. Or you can slow down, take a breath, realize there’s another gate, and maybe even enjoy the scenery along the way, also like I did… but not before all the sweat and cussing.

Maybe you’ll get to the same place you thought you were headed or maybe He’ll take you some place you never knew you needed.

One horse, two dogs, and little ol’ me – we set out on a cool morning last week to gather several hundred pairs (cows + their calves) from a few hundred-acre pasture and move them to a fresh pasture.