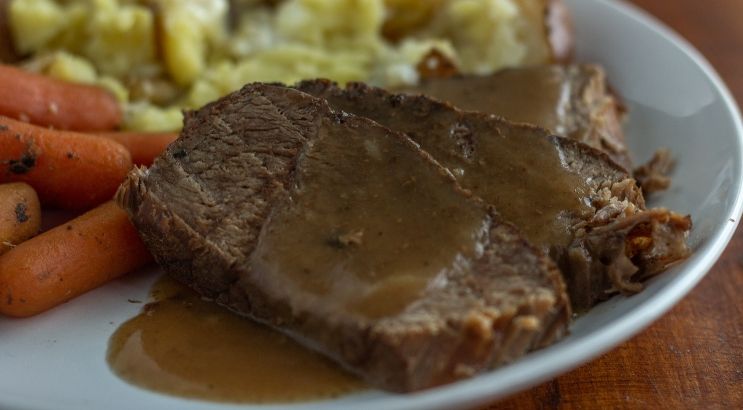 I don’t know about you, but June isn’t exactly what I’d call “pot roast” season. Yet, here I am sharing a pot roast recipe in June. But, in my defense, this is a ridiculously tasty pot roast, and we did have a frost warning out three nights ago, so there’s that.

Also, my girls at Ranch Wives Beef Co. generously sent me a beautiful sirloin tip roast along with my order of all-beef polish sausages and hotdogs. I decided to use immediately, mostly because it was still chilly out and partly because I didn’t have a solid meal plan. And pot roast sounded good.

The beauty of this recipe is that you can use pretty much any roast cut you’d like. The roast featured in the photos is, like I said, a Ranch Wives Beef Co. sirloin tip roast, but I’ve totes used chuck and rump roast for this recipe too with the same ridiculously tasty results.

And unlike its ridiculously tasty predecessor, you can pop this pot roast in the Crock Pot, set it, and forget it. But what you won’t be forgetting is its ridiculous tastiness.

A tasty pot roast you can pop in the Crock-Pot, set, and forget. But what you won’t be forgetting is its ridiculous tastiness.

The roast featured here is a Ranch Wives Beef Co. sirloin tip roast, but rump, round, and chuck will all work.

Feel free to crush up the rosemary leaves a bit. I do.