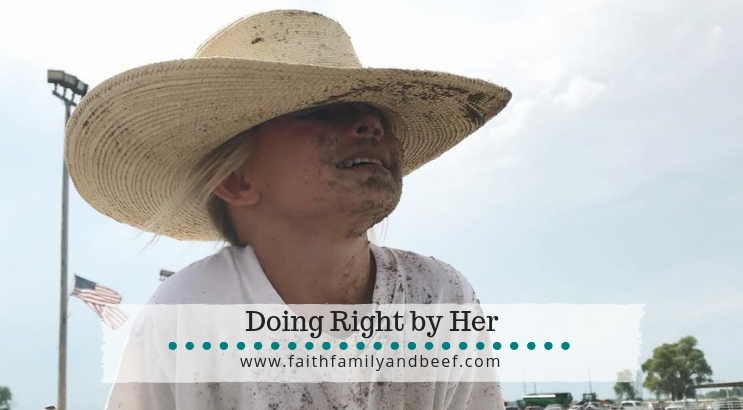 With dirt covering her face and a smile smeared across it she said, “I didn’t want to ride that sheep mom.”

“You didn’t want to ride a sheep?” I questioned.

That’s when it hit me.

That’s the moment I knew she hadn’t been blowing off my mom talks. All my talk about making choices and sticking with them are sticking in her mind. Our discussions about following through even when we’re not crazy about our original decision, and those times she’s been watching when I’ve stuck with something even though I’ve wanted to give up haven’t been all for naught.

She’s been listening, watching, and retaining this whole time.

She signed up to ride a sheep. She second guessed herself. But she pushed down the fear and shoved the uncertainty aside. She got on that sheep anyway. And she rode a long way – so much further than she thought she could.

More often than not, I wonder if she’s taking it in and learning from me and my husband. I second guess our approach and doubt that we’re doing right by her to set her up for success as an awesome human. But then there are times like these – when she does the thing she doesn’t want to do because she’s scared or doubting her ability and it takes her farther than she could ever have imagined.

These are the times I’m completely certain we are doing right by her.