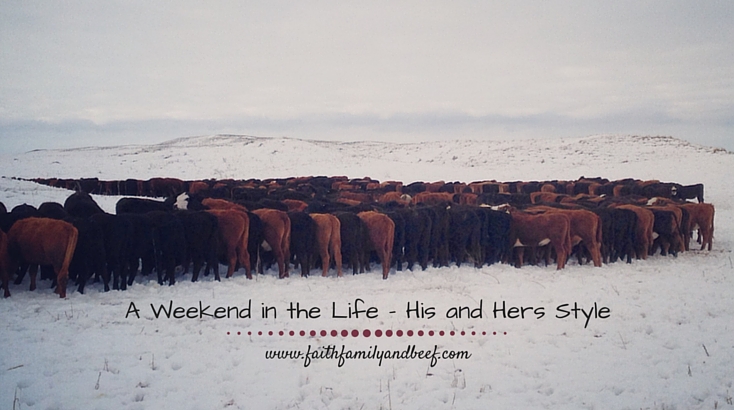 This past weekend was definitely one we won’t be forgetting anytime soon. We had heifers calving, 10 or so inches of heavy, wet snow, wind whipping at 20 miles per hour, and no electricity for more than 24 hours. It was interesting crazy, to say the least.

Here is a more in-depth look at how our weekend went down – a weekend in the life, his and hers style.

Tom started the day with a night check of the first-calf heifers, the heifers who decided Thursday evening would be an excellent time to start calving with intensity a full week ahead of their due date. Night checking is not the norm around here, unless there is inclement weather afoot.

I was up to calm the baby, who was in desperate need of a midnight snack.

He came in to grab a thermos full of coffee before heading back out to the pasture, this time with the tractor to feed more hay in an effort to discourage the heifers from drifting in the driving snow.

The aroma of the coffee he brewed called me up and out of bed. I started my day with prayer and a strong cup’o’Joe – or a little coffee and a whole lotta Jesus, as they say.

Finding, drying, and supplementing newborn calves was the name of his game. As part of his nesting phase, Tom had stocked the portable calving barn, which was set up near the calving pasture, with towels and a case of colostrum (liquid gold) supplement for instances such as this.

Intern Kord all decked out/posing in a vintage hat we got from one of our dear friends and a pair of my sunglasses. Yes, those are zebra print ear pieces.  Yes, he did wear them to the pasture. And no he hasn’t taken them off since.

The interns we have working with us this summer came back to the house because they couldn’t make it out to the calving pasture in the pickup. We called Tom on the radio, and he asked them to bring the side-by-side ATV, more hot water, and any towels we could spare because he was about out of supplies. In fact, he was so low that he had started mixing the colostrum supplement with coffee from his thermos. “The coffee/colostrum combo – it really does the trick,” he professed.

The power goes out… And I know it isn’t a good sign when I call to report it and the automated voice on the other end informs me to “Please, try your call later. Due to high call volume, we are unable to take your call.”

The boys come in briefly to grab a snack and then head back out to move and feed the herd of yearling heifers – Tom in the tractor and the interns in the cake pickup. I really wish we would have had power so I could have heard the interns call over the radio, “Tom, our ox is stuck in the mire. Could you come give us a push?” This hilarious request was code for, “We got the pickup stuck, and we want to spare ourselves the embarrassment of saying it over the radio.”

I told the interns I would have chili and cinnamon rolls ready for them come lunch time. But with the power out it didn’t look like I was going to be able to make good on that promise… So, I started brainstorming lunch ideas.

With the power out, Tom sent the interns home to grab their overnight bags and their Destiny (the wife of one of them) and come back to settle in for the long day, and night, ahead. Meanwhile, Tom tried to catch a nap. But three kids cooped up in the house with no power is not really conducive to napping.

Cooking up some chili in my “kitchen” – a.k.a. the garage.

Making good on my chili promise, I started cooking a big Dutch oven full on the grill in our garage. And if I would have thought of it sooner, I probably could have made good on the cinnamon roll promise too.

I had the chili done, so Tom grabbed a quick bite to eat and headed back out to the calving pasture.

I waited for the interns to return, gathered snow to melt for drinking water, hot chocolate and coffee, and prayed that what little propane I had left would get us through supper. I also explained for the twenty-hundreth time to the kids what it meant to be without electricity – no you may not watch a movie or warm up hot chocolate in the microwave, run the water in the sink, call grandma from the cordless phone, or flush the toilet…

After quite the adventure getting the pickup stuck and hiking to the tractor, the interns, and Destiny, finally made it back. The boys ate a big bowl of chili and headed out to join Tom, finding, drying, and supplementing newborn calves.

While I assessed the water leaking in the mudroom situation, Destiny spent the afternoon entertaining the cooped up kids – a hefty job in and of itself.

I got word from Tom that he was sending the boys back and he was going to make one more pass around the pasture before coming in for supper and some shuteye.

After some thought and taking into consideration the resources at my disposal, I decided to go with re-heated leftover chili and a side of burritos for supper. So, I got started on that while we waited for the boys to return.

Tom finally returned from the pasture. He had supper by lamplight, and we all settled in for some much needed rest.

Tom took the night check while everyone else got rested up for the day to come.

It was the changing of the guard – Tom came in for a nap and the boys headed out to keep up with the happenings in the pasture.

Tom and I headed out to feed the yearling heifers, while Destiny stayed in to ride herd on the kids. I had a hard time getting around with the cake pickup in the heavy wet snow, so Tom drove in front of me while I caked. I was just about ready to head back to the house when he called on the radio for the tool box. The PTO (power takeoff) that runs the hay feeder had come apart… He ended up unloading the bales from the hay feeder and manually rolling them out with the bucket of the tractor to get the heifers fed.

In the unloading process, one of the chains that helps move the bales came out of its track. While we were working on getting the chain repaired, Tom noticed that part of the PTO was missing. So he stayed and fixed the chain, and I took off on a hike through the hills retracing the tractor tracks until I found it buried in the snow. When he saw that I had found the missing piece, Tom celebrated with Vector’s “oh yeah” dance from Despicable Me.

We headed back for the home place where Tom promptly fixed the tractor, hayed the horses, and headed back out to meet the boys in the pasture.

Destiny and I wrangled up the kids and headed into town to grab supplies in case we would be without power for any longer. On the way to town, we met the linemen on the road, and we rejoiced. Seriously, we smiled and waved at them uncontrollably. And based on their reaction to our crazy smiles and frenzied waving, I am positive our gratitude was understood.

It was just as we had hoped/prayed when we returned home from our supply run. The power had been restored. The kids, Destiny, and I – we all did a little happy dance. And then we found it – water in the basement… I got the ShopVac set up and began the tedious process of drying things up.

This heifer is taking exceptional care of her calf, cleaning him up and drying him off.

The guys came in for an early supper of leftover pizza that we had picked up in town. They told stories about the aftermath of the storm. How as the sun began to shine and the snow started melting, they worked diligently throughout the day to reuniting calves with their mothers. But the stark reality of storms like this is that no matter how “prepared” we are, and despite our best efforts in the heat of it, we are not always able to save every calf. So in addition to all of the reunions, they had the gut wrenching job of bringing in the few heifers whose calves were lost in the storm. These heifers will be first in the graft (adoption) line should there be any calves in need of a new mother.

The guys headed back out for one final check of the heifers, and I headed back to the basement where I prepared for more water.

The guys returned from the pasture for the night. Tom worked on some record keeping, and we all took in a little bit of The Sacketts before heading to bed.

It was one helluva weekend for sure. But today is a new day, the sun is shining again, and we truly do have so much to be thankful for.