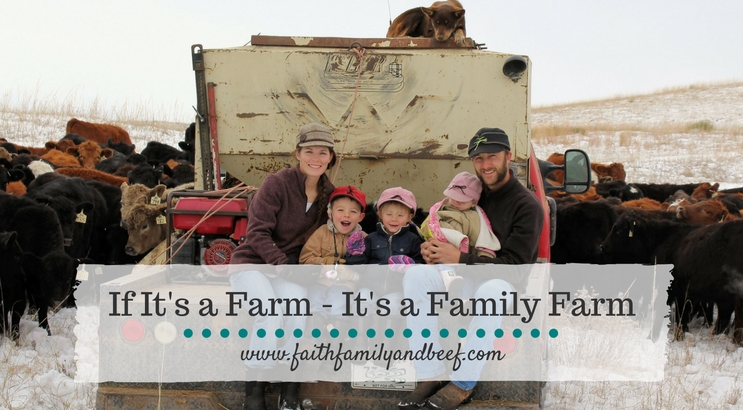 Ninety-seven percent of the farms in the United States are family farms. – 2012 Census of Agriculture Farm Typology

By definition, a family farm is any farm where the majority of the business is owned by the operator and individuals related to the operator. And that is a pretty impressive little statistic, considering there are 2.1 million farms in the United States. But I would argue that the definition of family farm is false and that 100 percent of farms are family farms.

I do not have any numbers or fancy statistics to back up my claim. What I do have is my life experience in its entirety, and my experience tells me that if it’s a farm – it’s a family farm.

I spent my childhood on the same small feed yard where my dad grew up. I can remember visiting my grandparents there, moving into their house when they retired, and all of us kids (my brothers, cousins, and me) helping my dad and uncle with chores on weekends and over the summers. That feed yard is where my family has been raising beef cattle for more than 40 years and it is where I call home. So, would you believe me if I told you that not one of my family members holds, nor have they ever held, any ownership in the operation?

After graduating from college, I stepped out into the corporate world. That’s right – I took a job at a large-ish corporate feed yard complete with stockholders, different departments (i.e. management, feed, animal health, maintenance, etc.), and customers (farmers and ranchers) who brought their cattle to us to be conventionally fed and cared for until they reached market weight. Definitely doesn’t fall under family farm – or does it?

For seven years, I was part of the animal health crew. And for seven years I worked with the same core group of people that made up the rest of my crew, as well as those from all of the other crews. We formed lasting friendships. Fought with each other. Laughed together. And most importantly, we worked toward the common goal of raising safe, wholesome and nutritious beef.

We may not have owned any of the thousands of head of cattle we cared for on a daily basis. And, we may not have been related by blood (although several were). But, we are a family.

Our kinship is evidenced in our constant contact with one another and the fact that every summer I attend a “family” reunion disguised as a backyard party put on by a former coworker. Not to mention that my daughter was a flower girl and I stood up as a bridesmaid when one of the daughters of my former manager (Bob) got married.

Speaking of Bob – Bob was way more than just a manager.  To me he was a mentor, a role model, a father figure, and the kick-in-the-pants motivator I needed. He pushed not just me, but the whole team to do better than our best. His catch phrase, “it’s all attitude,” has become one of the mantras I live by. And, I am not too proud to admit that when I made the decision to leave the feed yard, my exit interview pretty much consisted of a huge hug and an ugly cry.

Farming and ranching is a family affair.

My decision to leave the feed yard led us to where we are today. This ranch, the one most often featured here and in my photography, is where we live and work. It is where we are raising beef and bringing up our family, but it is not family owned. In fact, our little slice of Sandhills heaven is part of a large ranch, consisting of a number of different units (homesteads) and several herds of cattle. But no matter the ownership, the land and the cattle that make up each unit are cared for by families just like mine.

Like I said, I do not have the numbers or the statistics to back up my claim. But I do have the nearly half a century of family dedication to raising beef on the feed yard where I grew up, the lasting relationships built in common goals from the corporate feed yard where I spent seven years of my adult life, and the joy of ranching and raising beef while bringing up my family as evidence that if it’s a farm, no matter the ownership, it’s a family farm. And that is a statement I will stand by.