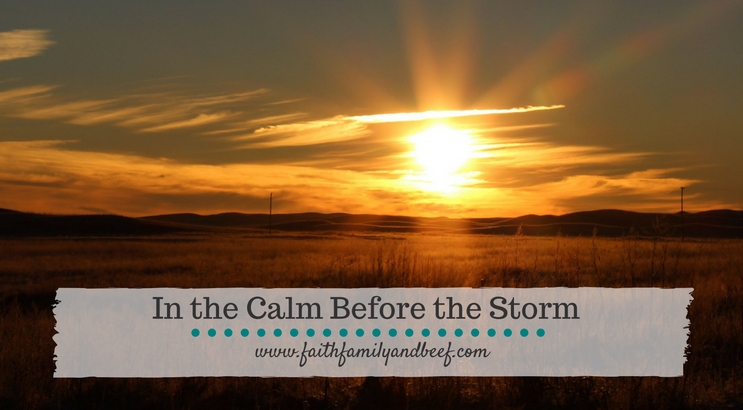 The sun was shining, it was fairly warm, and there was virtually no wind – yesterday was a gorgeous day.  The beauty of the day made it hard for me to believe today’s forecast for snow turning to wind and snow so, basically a blizzard. And then Tom snapped me back to reality. He reminded me that we do live in Nebraska and that yesterday was simply the calm before the storm – the time in which we get all the hatches battened down before it gets real.

If it were summertime, the calm before the storm would be just that – calm. We don’t worry too much about summer storms because it is warm and they generally don’t last that long. It is winter storms that are cause for concern, not so much because of the snow and cold. Because of the nice fluffy coat they grow, cattle actually handle the cold with a gentle snow reasonably well. It’s the cold and snow coupled with wind that causes an un-calm before the storm for us as we scurry around preparing for what’s to come.

Before winter storms blow in, we have this sort of checklist that we rundown to ensure our cattle will be relatively comfortable for the duration. In the calm before the storm we:

On a meadow is not a good place to ride out a winter storm. Because they are flat, meadows are extremely unprotected. So in anticipation for the storm that blew in over the weekend and this one that is now upon us, we spent most of Friday moving both of our herds – the first-calf-heifers and the weanling calves. We moved them off of their respective meadows and into pastures with lots of hills because hills equal protection.

In order to encourage our cattle to stay within the protection of the hills, we feed them in deep valleys. Placement of the feed is only part of the strategy. We also deliver more, or different, feed depending on the needs of the cattle. For example, instead of feeding the first-calf-heifers grass hay, yesterday Tom them fed alfalfa hay. Alfalfa has a higher protein content than grass and is better suited to meeting the additional nutritional needs of the heifers while weathering a winter storm.

Plug in the vehicles and treat them with Howe’s.

Both the tractor and the cake pickup we use to deliver feed run on diesel fuel. So, we actually do both of these things as soon as the temperature starts dipping below freezing at night because if we didn’t nothing would run. I am no mechanic, but I do know that plugging the vehicles in keeps the glow plugs warm and the Howe’s (our fuel treatment of choice) prevents the diesel fuel from gelling. Both help keep us up and running and able to care for our cattle in the midst of stormy weather.

Get ice chopping on our minds.

For the most part, our cattle will stay hunkered down where we fed them until the storm lets up. They are not likely to leave the protection of the hills, even for water. So when they do come out, they have drinking water on their minds, and the tank is usually the first place they head. For that reason, we mentally prepare (I am all about mental preparedness) to chop ice if/when it is needed, ensuring the cattle have an open water source when they get there.

So as unbelievably nice and deceiving as days like yesterday can be, I am ever thankful to be blessed with days like those. It is in those calm-before-the-storm type of days that we are able to get our cattle ready and mentally prepare ourselves for what is to come. And also, it allows us some time to say a little prayer that what is to come won’t actually be quite as bad as we think.