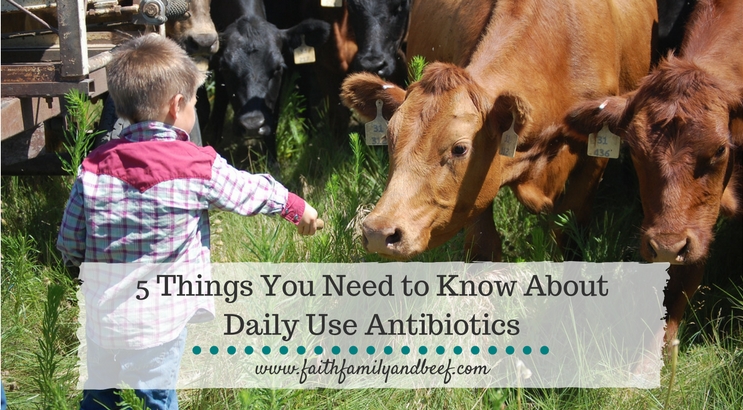 With all the talk of antibiotic resistance, it can be slightly disconcerting when you hear “antibiotic” and “daily use” in the same sentence. The following is a reader comment, in response to the post “Antibiotic Free – What Does That Even Mean,” expressing concern in regard to the daily use of Rumensin®.

“The real issue here is the use of antibiotics like Rumensin for feed efficiency. The big feedlots that use it though would like you to think it’s about single animal treatments for health reasons though.”

Rumensin® is the trade name of monensin. Monensin and other feed additives like it (lasalocid and laidlomycin propionate) belong to a class of antibiotics known as ionophores. Ionophores are fed in small amounts to cattle on ranches and in feedlots mainly to improve feed efficiency. That being said, I can understand the worry conveyed in the above comment. But not all antibiotics are created equal – hence this post.

5 things you need to know about ionophores.

They help cattle do more with less.

Ionophores alter the flora of the rumen (the first compartment of the bovine stomach) in favor of gram-negative microorganisms. In the case of ruminal bacteria – negative is positive and vice versa. Gram-negative microorganisms more efficiently break down cellulose (the dietary fiber that  is abundant in plants). As a result, cattle that are fed ionophores require less feed and fewer resources to gain weight.

The cake we feed our cattle contains Rumensin®. We feed cake as a protein supplement, but that cake also helps our cattle more efficiently digest the plants they eat and ward off coccidiosis.

They target negative gram-positive microorganisms, reducing their population in the rumen. So in effect, ionophores reduce the waste produced by said microorganisms, including the greenhouse gases methane and ammonia.

The use of ionophores reduces the use of therapeutic medications.

While ionophores themselves are not used therapeutically, they do reduce the need for the therapeutic medications that treat coccidiosis. Coccidiosis is an unpleasant disease that causes cattle to experience gastrointestinal discomfort, severe diarrhea, and if left untreated can lead to death. It is triggered by high numbers of the parasitic protozoa – coccidia. The good news is that ionophores keep coccidia numbers in check, helping to prevent the development of coccidiosis.

This is an excerpt from the tag that comes when cake is delivered. As with medications, all feeds and feed additives come with labels that are strictly adhered to by farmers and ranchers.

In more than 30 years of daily use, ionophores show no decline in efficacy.

In other words, there is no evidence to suggest that the microorganisms targeted by ionophores have developed resistance.

Based on the facts listed above, I am of the opinion that the daily use of Rumensin® is something to be celebrated. I mean – Rumensin®, and ionophores like it, allow farmers and ranchers to raise beef more efficiently using fewer resources, decrease waste, and reduce the need for therapeutic medications, all while maintaining efficacy and posing no detriment to human health.  I’d say that is pretty win-win.

As with any other topic – if you have further concerns regarding ionophores, please, feel free to post your questions in the comment section of this post, or send them to me using the Contact Me page.